Our sweet little guy turned one in March and my daughter was kind enough to let me host his first birthday party at my house. (Thank-you daughter for your complete trust in me). I did have a couple of requests though – no pink and nothing girlie-girl. Well not being a fan of trucks, trains or planes especially for a one year old, I decided to pick out a theme that would be suitable for his age but something his dear, sweet little sisters could enjoy as well, so on that note . . . (may I have a drum roll please………..)

Can you take a wild guess what kind of a party I gave? If you guessed “The Three Little Pigs” you are correct!! Yikes, pigs are pink so I had to take this theme party to the next level, color without too much of those pink pigs.

The welcome wreath to greet the three little piggies who will be gracing my front door to enjoy a fun and festive day. You are cordially invited to:

My daughter told the littles to get ready for the party and the 4 year old said, “We haven’t got our invitation or our party clothes from Mimi yet.” As some of my readers know, hubby and I like to drop their invitations and party clothes off at their front door, ring the doorbell and run. We called it ding-dong piggies this time. They waited patiently for their packages and they waited and then they waited some more. If they only knew the trouble I had with one of their dresses. I had to rip out a seam and my hand slipped and oops, I ripped the whole bodice. I was so angry that I decided a trip to the library would calm down my nerves. Heehee any excuse to go to the library works for me. This will teach me to quit waiting until the very end and quit working under pressure.

The presents were wrapped to look like bricks and I put on pink twirly suckers for pig tails. I was totally smitten with their invites, each invite had the pig number on the card to represent the birth order of the littles. When they got to our house the oldest said to me “I’m piggy number one.”

Party outfits, piggy headband with ears and my favorite, piggy noses or should they be called snouts?

I made Gianna, the oldest, the wolf outfit, the blue with white polka-dots is an American made fabric that I had bought at Joanne Fabric. (I just had to add that little tidbit just in case anyone is interested in only American made). I made her a twirly skirt with an embroidered wolf apron that is attached to the skirt and I appliqued a white shirt. 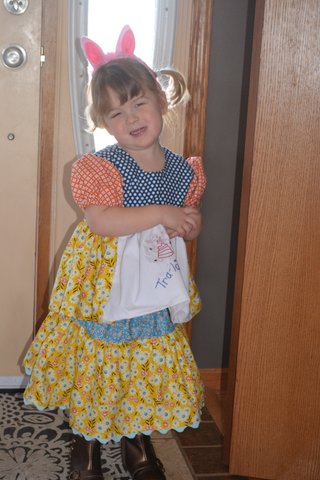 The younger of the little girls is Giavella, who is just the sweetest little pig all adorned in her piggy ears and her pig tails. I embroidered the three little pigs on her dress. Her dress is from McCall’s 6688, which by the way is an easy pattern to sew.

The birthday boy is a blond hair, blue eyed cutie who received an appliqued t’shirt with his initial on the house and a wolf going down the chimney.

Oh my, will you just look at my sweet littles, they just melt my heart. I am soooooo unbelievably blessed to be their Mimi. The Lord knows the desires of our hearts and he knew my hubby and I wanted to be Grandparents in the grandest way.

My youngest son helped with the decorating and putting up the streamers. I think he should go into business hanging up streamers because he did such a fantastic job.

As you can see I respected my daughter’s wishes and didn’t have a lot of those pink pigs. I focused on color and the Disney pigs. I painted the canvases if anyone is wondering. The banner is illustrations I found off of the web. 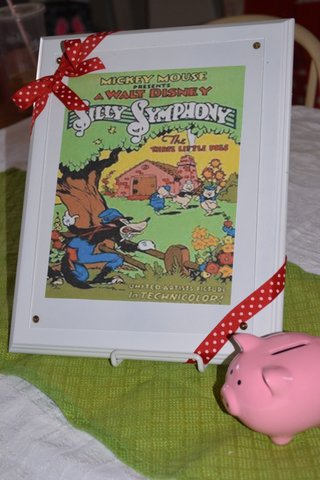 A co-worker had pulled these plaques out of the garbage and I painted them white and added these Disney illustrations. The pink piggy banks I bought at Target for 25 cents. I bought 6 of them and I didn’t “break the bank.” Heehee, no pun intended!

I also pulled this frame out of the garbage at work and just added another Disney illustration, as you noticed all the illustrations are vintage. I bought the pink twirly pig tails and the gummy pigs off of Amazon.

Another co-worker pulled out some foam boards out of the garbage at work and I was able to cut them out and paint them into pigs and the big bad wolf, I painted the pigs a peach color and attached them with string and put them on the treat table.

Hubby had Walmart make the cake and it turned out so sweet and the cake was actually delicious. I am a sweet hog so any type of cake, cookie or pastry is fine to me.

My daughter made the piggy cupcakes, she did a wonderful job  and they were very tasty. She also made chocolate covered bacon with pistachios, which I could not leave alone. Who would ever thought such a combination would taste so good.

Hubby and my son made the houses for the party, and they were a very big hit with the littles.

The house made out of straw was shredded paper that I got at work and the sticks were collected in the woods. FREE, FREE, FREE! I love that word! We used a spray on glue to hold the shredded paper.  My husband and youngest son, Corey, did a very good job on making the houses!

The brick house was paper that I ordered off of Amazon. I was going to paint the bricks on but time was running short. Where does the time go?  I know I was lacking in that department.

I bought these houses for Velly’s second birthday. she had a nursery rhyme birthday party, who would of ever of thought I would be using them this year for a prop. The brand of toys are made by Melissa and Doug, highly priced toys but they are usually educational and don’t fall apart easily. 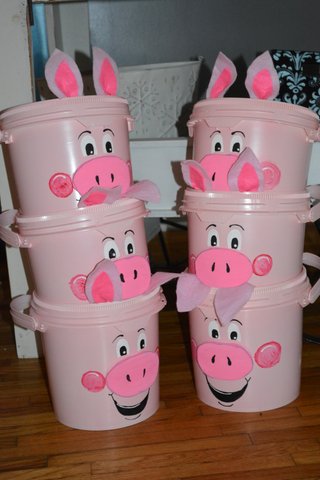 We bought some buckets at the Dollar store and spray painted them pink and  painted pig faces on them, but my new dilemma was what to throw in the buckets? 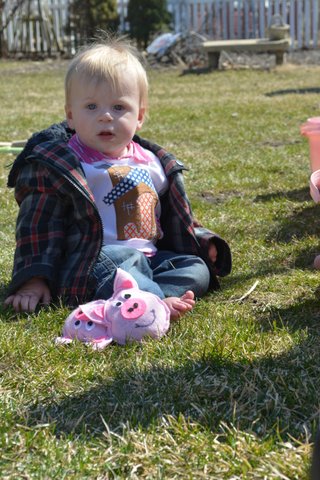 Pink piggy felt bags, now on to the ultimate game of Piggy Buckets. This game is going to become BIG, I know people will be clamoring to get at the paten for this game. My phone will be ringing off of the wall real soon.

We also put on puppet shows, my talent for acting will also go world wide, I will become a celebrity, have my name in lights and make a ton of money, so that I could make more pig buckets!

Well at least some people take me seriously and know that I have true potential. 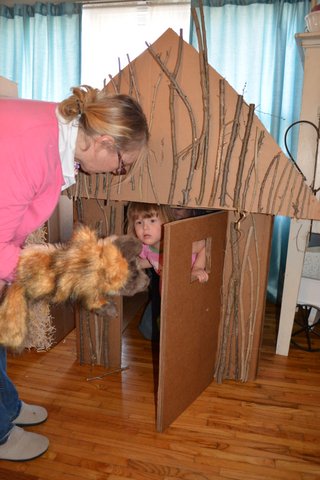 I was so good at saying “little pig, Little Pig, let me in” that Velly was not going to let that Wolf in the house, or her Momma has taught her so well not to open the front door to any strangers.

That’s me as the pig now, I am so good that at any moment I could play another role. I was really demoted and another actress, whom I’m not even worthy enough to wear her shoes stepped into the wolf role.

Books were read about the “Three Little Pigs” and any other version with the wolf .

My voice is so mesmerizing that even one of my dogs had to listen to the story. She ran and hid when I started to growl like a wolf! 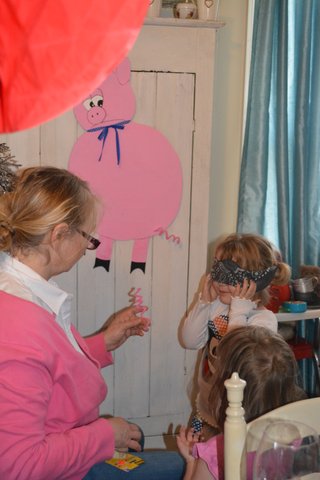 Pin the tail on the Pig. 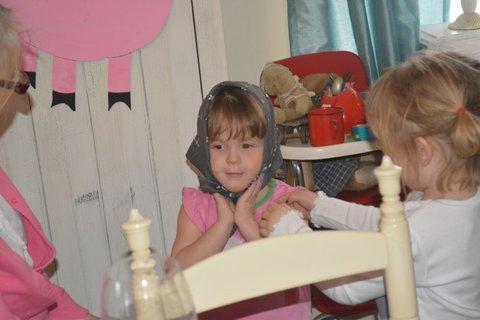 Velly decided she would rather wear the bandanas as a babushka and not wrap it around her eyes. She is so in tune to fashion that I think Ralph Lauren will want her on his fashion team. Such glamour, such magnificence, “Okay Velly we’re playing pin the tail on the pig can we have the bandana back?”

Last but not least there were the presents to open. I just love polka-dots and when I saw this at the Dollar General I knew the paper would tie in with all the decorations.

As usual, Momma has to open the presents and baby’s more interested in the box . I hope you enjoyed our party and you were able to capture the joy that we have for our littles. They say laughter is the best medicine to make you healthy , wealthy and wise. If that is the case :

My family is the healthiest, wealthiest and the wisest!